In our careers as travel and nature photographers, one of the best trips we’ve ever taken was when we went to Hawai’i at the end of 2016. Originally intended as a birthday present for Anji, the time we spent exploring the Big Island gave us the chance to expand our portfolio of nature pictures far beyond what the sort of images that we had been able to capture at home in Washington, DC. As much as we love all the memorials and monuments of America’s capital, there is not a lot in the world that can compare to the natural beauty of the Hawaiian Islands!

On our second day there, we ventured out from our beautiful hotel (the Mauna Lani Bay Hotel & Bungalows, which we cannot recommend highly enough) and traveled around the northwest corner of the island to Pololū Valley. We got out of the car and followed a steep trail down sea cliffs until we reached the bottom, where the Pololū River flowed through a lovely black sand beach and into the ocean. Along the way, we got some beautiful photos of the interactions between the sun, the sea, and the earth and rocks of the cliffs.

During the course of our time on Hawai’i, we also made two separate trips up to areas near the summit of Mauna Kea, one of the two enormous volcanoes that dominate the landscape of the Big Island. In addition to seeing and photographing a rainbow arcing across the highway and some barren moonscape high plains, we also had the opportunity to experiment with new takes on sunsets. From high up on the slopes of the volcano, we were actually shooting from above a layer of clouds and got some really unique perspectives of the sky lighting up as the sun went down.

The highlight of the trip from a nature and travel photography point of view, however, was the doors-off helicopter ride we took on our third day there. Our hotel was kind enough to help us arrange the tour with Paradise Helicopters (another company we wholeheartedly recommend), which is based out of Hilo International Airport.

On the day of tour, we drove around the north end of the island; made a quick stop at ‘Akaka Falls State Park to walk through a rainforest and get a few pictures of the massive waterfall that is the highlight of the park; and arrived in Hilo with plenty of time to figure out what lenses to put on our cameras for the helicopter tour. Anji decided to go for dramatic wide angles and put our Nikon 24-120mm f/4 on her Nikon D5. I opted for tighter shots and used our Nikon 70-200mm f/2.8 with my Nikon D750.

To be honest, I’m not sure how either one of us managed to take any pictures during the first few harrowing minutes of our flight. We seemed to go from the ground to hundreds of feet in the air instantaneously, and looking out of the open door and seeing nothing between us and the increasingly distant Earth left both of us clinging to our cameras very tightly! 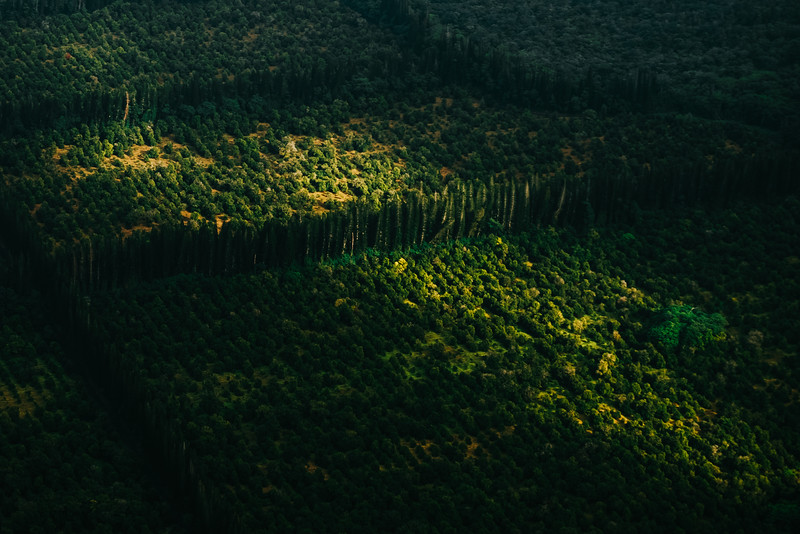 The fear was worth it, though, judging from the images we were able to get. We first passed over lush rainforests that were dappled with rays of sunlight beaming through the patchy cloud cover. From there, we went up the slopes of Mauna Loa, the other major volcano comprising the bulk of the Big Island, and skirted around to the caldera of Kīlauea. This smaller volcano, which is located within Hawai’i Volcanoes National Park, has a very distinctive crater in which orange magma frequently peeks out through cracks and holes in the layer of cooled lava floating on top.

Lava Viewed Through A Vent In Hawai'i's Kilauea Volcano 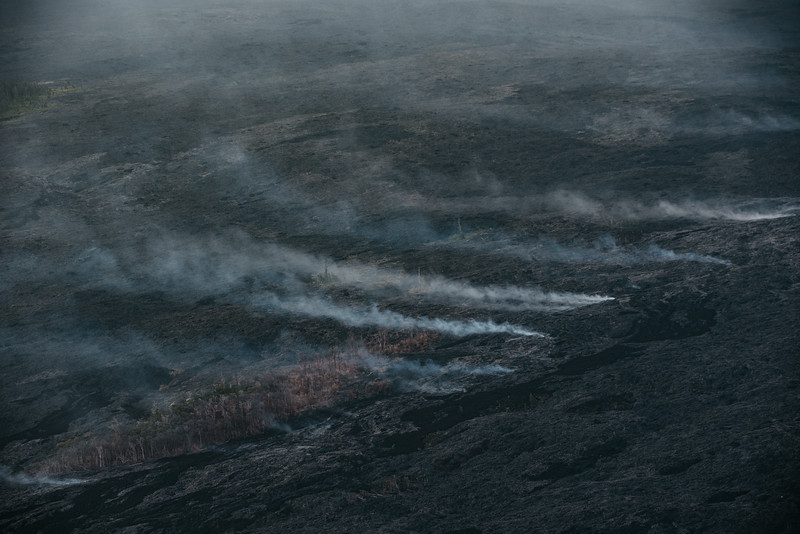 From there, we proceeded southward through desolate, smoking lava fields to the southeast coast of the island. As the helicopter circled back and forth above the shoreline, we saw huge plumes of smoke billowing up from the areas were lava was flowing into the aqua waters of the Pacific Ocean. The minerals carried into the sea changed the color of the water to a murkier light green and led to some visually striking images as it contrasted with the bluer-green waters of the ocean.

Aerial View Of Fog Rolling Over Hawaiian Rainforests And Waterfalls

On the way back to Hilo International Airport, we got one last treat as we passed over several beautiful waterfalls (which we got to photograph from a completely new perspective) and forests of trees whose tops were arranged in interestingly blocky patterns, giving them a very textured appearance.

Unique Trees In A Rainforest Near Hilo, Hawai'i

When we got back on solid ground again (and more importantly, when our legs stopped shaking!), we couldn’t wait to get back to the hotel and look at the photos that we’d taken. Needless to say, we loved them! And just as unsurprisingly, we’re still trying to scheme a way to go back and take pictures of everything on the Big Island that we didn’t get to!